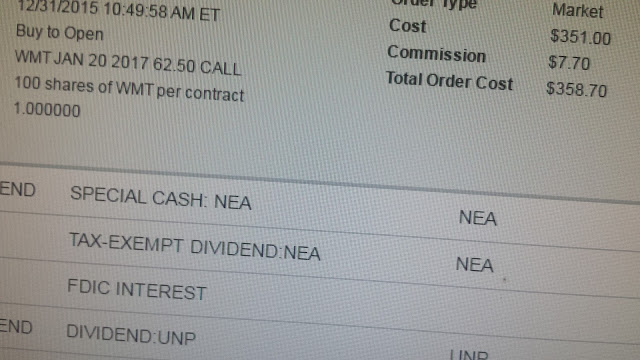 On 12/31/2015 I made one final purchase for the year. I know most bloggers (including myself) sell covered calls and puts on companies they would like to own. I took a different path and purchased a $62.50 WMT Jan 20 2017 call.

My thought process was pretty simple and certainly not scientific. While I have used the Dogs of the Dow (highest yield dow stocks) strategy many times to pick up under performing companies I modified this strategy a bit with this purchase.

It is true that WMT has fallen out of favor, but I made this call purchase decision based on the notion that WMT was the absolute worst performing Dow stock last year. Reversion to the mean and all that mumbo jumbo.

When I purchased the call for $3.58 including commision WMT was trading in the $61-62 range. This purchase gives me the option buy 100 shares of a great company during the next year or so. Right now WMT is trading between around $63.50 so I could sell the option for around $5.00 and pick up a little over $130 for a 5 day trade. To put things in perspective, a WMT shareholder would have to own 100 shares of WMT (around $6300) for an entire year to collect $196 (under 3%)in dividends. Options can provide some serious leverage to your income. I invested $358 and have earned (on paper right now) about a 35% return in only 5 days.

I probably will keep the option open as I wouldn't mind owning the shares, but I just don't want to buy them right now.

DEFY MEDIOCRITY
Posted by My Dividend Pipeline at 10:03 AM